Reasons You May Need to Repipe 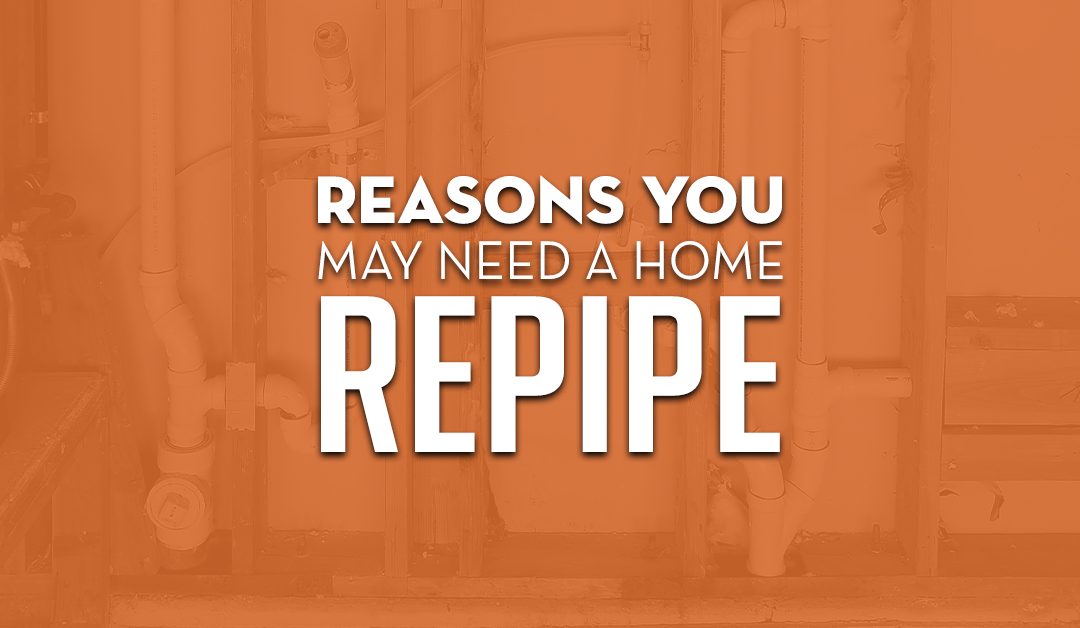 Indoor plumbing is nothing new but many of us don’t even realize what life was like before it ever came along. Ever since the 1840s, people have enjoyed the perks of indoor plumbing and piping. Once considered only a luxury, some homes were not even equipped with this amenity until the late 1960s. Next to sliced bread, indoor plumbing was considered one of the greatest inventions we still enjoy and experience in almost every modern-day home or building. Unfortunately, even some of the sturdiest and most splendid piping installation was the subject of wear and tear. This would certainly eventually need to be completely replaced. This leads to the question on everyone’s mind; when do you need to repipe?

What Does “Repiping” Mean

First, you need to know exactly what “repiping’ means. Repiping is the term used to describe the replacement of the pipes in your home or building. This could mean replacing one section of an existing problem area or it could mean a full replacement of the entire piping system. For a small section, you could experience an hour or more of labor, or for an entire piping upgrade, plan for a few days. This all, of course, depends on the size of the building/home, and the material decided upon to replace the old piping with. An experienced plumber with Cooper Plumbing is your best guide when making this decision.

There are different types of piping used in older homes and buildings. Some of the former types of piping that are no longer used and most commonly found in repiping jobs are:

Having outdated piping is certainly one reason to upgrade or completely repipe the home. In addition to this, there are many other reasons to call a professional and consider a repiping job. They are as follows.

Low water pressure is not only an inconvenience for any homeowner, but it can also be a warning sign of a much larger problem. Corrosion, buildup, minerals, and rust can lead to your water pressure going from a full blasting stream to a mere trickle in the kitchen sink. It’s hard to get clean when your water pressure performance falls short.

If this is the case, it’s best to find out sooner rather than later if you have a piping issue before it can become a health hazard in the home. Not only can it be a sign of a health hazard, but it could also be an indication of a possible leak somewhere. Once the damage is done, your repair costs can escalate quickly if not taken care of in a timely manner.

Having a leak in your pipes is one of the most common and obvious reasons for a repiping job. If you are lucky and dealing with a small leak, you may only need one section of piping to be replaced. However, if you have a massive leak or a leak due to outdated piping issues, a full repiping job may be called for. How do you know if you may have a pipe leak?

Although many homeowners may attempt to make repairs themselves, this could be masking a much larger plumbing problem. If one leak is found, it can be safe to say that there may be more hidden or undetected. Luckily, the professionals have leak detection services that can prevent overly costly repairs in the future.

The foundation of your home is very important. When your slab begins to crack or leak, you can incur permanent costly damage. One indication of a slab leak can be found in your flooring. You can find it in the carpet of your home, tile, or even your hardwood floors as well. Once the floor is damaged due to slab leaks, your subfloor can also be damaged. If left untreated for longer periods of time, you can expect soil erosion and your foundation to eventually shift which could be extensive.

The best way to avoid slab issues is to maintain the lifespan of your pipes. If you hear running water under your feet, or feel warm spots a piping slab leak could be your issue. A professional plumber can usually find these issues before the major damage occurs and get your plumbing back on track.

Fresh and clean running water is a must for every home. Your tap water and water to shower in should be clear and without odor. Sadly with outdated pipes, your water can be discolored and produce an egg-like stench that makes it impossible to do daily chores such as laundry and dishes. Yellow, red, or brown water discoloration can be an indicator of rust or sediment leaking from your pipes and into your tap. Even water filtration systems can’t filter out a continuous cycle of rust which presents a safety hazard if not taken care of.

If your water isn’t looking its best, It may be time to consider repiping the household. Family safety is a big priority and unhealthy water can lead to health issues, and even staining your garments. Years of breakdown in your piping is worth professional repiping to get your water in its best condition possible.

Not every home or building we move into is a new build. With this being the most common case, homeowners and businesses generally can expect pipes with a bit of wear and tear on them. In other cases such as historic buildings, some pipes can be completely outdated or have undetected leaks lurking in the walls. In any case, exercising preventive maintenance with your plumbing can save you from hazardous mildew, from sneaky leaks, unsettling rust in your drinking water, and major foundation issues in the future. Repiping for prevention can make all the difference for homeowners.

Your water pipes are not only a major modern convenience but also a very important necessity. By detecting major as well as minor issues early on with a professional plumbing expert, you can keep your water healthy and the household running efficiently when replacing piping that doesn’t fulfill its intended purpose any longer. If you feel you may need a piping replacement, call the efficient experts at Cooper Plumbing.